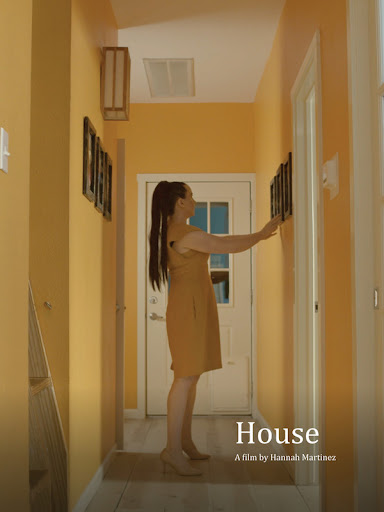 The story follows Liza, a woman dealing with severe compulsions and a strained family relationship as she tries to leave her house. She realizes she can’t when the house starts falling apart. Liza tries to put the pieces back together as her house and mental state crumble. Both end up completely falling apart in the end, only to reveal the twist!

Hannah Martinez is a Native South Texan and Tejana. She earned a Bachelor of Architecture with a Minor in Film and Media Studies in 2019 from Carnegie Mellon University in Pittsburgh, PA. Originally from Kingsville, Tx, Hannah spent the last two years of her undergraduate program combining both film and architecture. She worked on various projects including shorts, experimental films, and documentaries exploring history and social issues. In the Fall of 2020, Hannah began her graduate school journey when she enrolled in the MFA in Film & Video Production Program at the University of Texas at Austin. Fascinated with the way ephemeral elements such as memories, thoughts, and emotions interact with the tangible world, Hannah continues to create documentaries and narrative, original stories that showcase the views of underrepresented people, places, and perspectives. She’s currently working on the post-production on her most recent short narrative film, House. As the writer/director of this film, she was focused on showing the possible impacts of repressed emotions and how, without the necessary intervention, they can follow us throughout our lives.

As an artist, I’m especially fascinated with the way ephemeral forces have power over our lives. Memories, thoughts, and emotions affect the tangible, everyday elements that make up our worlds. I’ve also always been fascinated by the original Twilight Zone and its ability to remind an audience that things are not always what they seem, in order to get to the true, underlying emotion of the piece and its take on humanity. For this film, I wanted to tell a story of the possible impacts of repressed emotions and what the consequences could be if those emotions continue to be left unchecked. Equally important, I also wanted to tell this story from a clearly female centric perspective. In addition to the Twilight Zone, this film is heavily influenced by Luis Barragan’s modern Mexican architecture and horror films, such as Hereditary and The Shining. As someone that has experienced trauma at an early age and comes from an architectural background, I ultimately wanted to bring all of these elements together to create a piece that breaks down our typical understanding of time and space, in order to focus on the issues that really matter. How does unacknowledged trauma have the ability to shape our lives?

Our Father The Devil